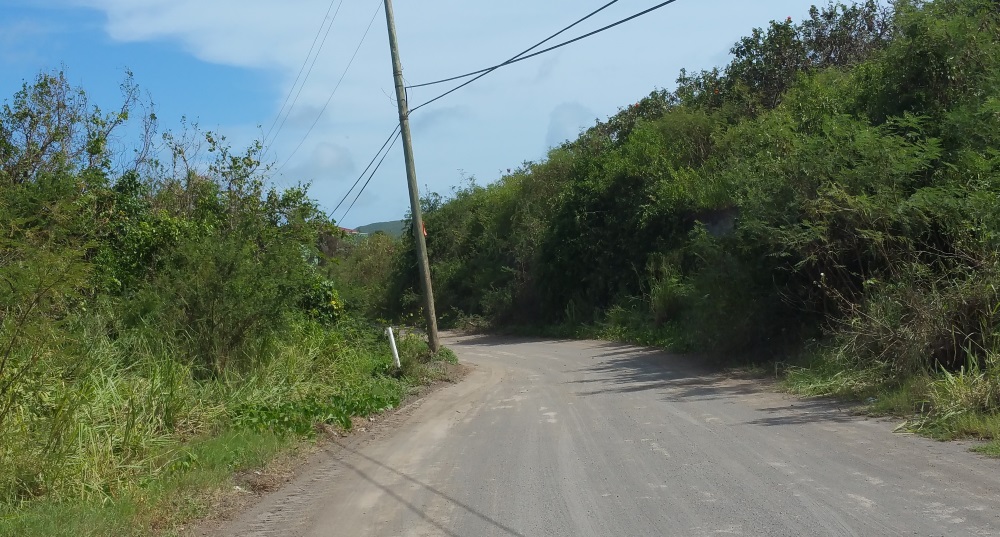 I’ve enclosed a selfie of myself as well as a photo I asked my neighbor to take of me. I want to tell you about all the exciting times I’m having at my new job in sunny St. Kitts. But I can’t. Because, well, life has been hell for me since moving here. My employer treats me horrible and working conditions are dismal.

I’ve been stationed sticking out into a road. I scream in horror every time two cars approach from opposite directions. And if I hear a truck coming, well I just relieve myself right there. I’ve left so much fertilizer at my base that I now have mushroom companions. I’m scared and don’t know what to do.

Fortunately I’m stationed near a mangrove community and those guys are very strong and shared lots of tips on who to hold on when the wind blows. They complain about the lack of womangroves though constantly and they drink a salty brew which I just can’t acquire a taste for.

I get hit with frequency. And let me tell you it hertz. The repair humans come and patch me back up repeatedly. They are great humans and I’m thankful for their fine surgical knowledge and dedication. But their bosses…… I have never seen their superiors (ironic, even tragic to use that term) must be of some other species because I can’t believe they are of the same DNA as those medics who take such good care of me. These so called superiors must be sadists and care for me even less than they do the humans.

I came here excited to stand proud and perform my duty holding the reigns of power which illuminate this island and power its human’s lives. Instead I’ve been mistreated and offered up as some kind of sacrifice to the gods or an incorrectly mounted battering ram. I didn’t come here for this. They might as well have painted a bulls eye on me. I don’t deserve this. I could have been simple house lumber, but I wanted to make a difference in many humans lives. Now I wish I had been destined for toilet paper. All that schooling would have gone to waste, but at least I’d not have to take this abuse.

I was lured in by their ads on the net.

“Is your wood soft? Or is your wood hard? Can it take a hard bang? Well then standing stiff like Atlas holding the world, you too can stand erect with power. Come work with us and mingle with exotic palm trees with skimpy foliage and firm non augmented coconuts.”

Worse yet, after talking to the electrons who pass at the speed of light through their super highways that I support, they tell me that they are actually scared to fly especially now that the TSA is everywhere and because of some demon called LIAT. They are in fact subterranean creatures who prefer to travel underground.

From dream to hell has been my journey. None the less I remain strong and am thankful that I’m not one of the poor poles stationed on Old Road Bay. If you think I have it bad, well I dare do not even describe the death camp that exists there for both poles and humans. They call it “Pole Harbor”

Myself I’ve been hit twice this year, and hits to my neighbors have ripped the wires from me as well even more. Every time this happens the pain is insufferable, and it takes away the electrons from thousands of humans. And well, they need electrons. Not just to live a modern life, but to keep and grow an economy and provide other important services like running water pumps to get them their necessary liquids for life.

Each time I get hit the humans carriages are damaged and cost them a lot of money.  By the way, what is this money thing? One human tried to explain it to me, but I guess it is just not for simple poles. Maybe Dad you would understand it? You’re a real North Pole. Anyways back to the subject, and the humans sometimes get hurt too. Sometimes they even leak some kind of red liquid and then another human carriage with flashy lights and what I think are people surgeons come and take them away. To where I don’t know, but they call it “jayeneff.” I’ve been told that the place has humans there who fix up broken humans like the humans who come fix me. I wonder who fixes the human carriages? I guess a carriage surgeon although I’ve never seen one and I’m not sure because the carriages don’t talk to me. They seem just as afraid of me as I am of them and it seems to cause them a lot of pain too when they bump into me.

Since the carriages seem to fear the pain of our collisions I have to wonder why they hit me so? Were they abused as little carriages?

I wish we poles and carriages could be friends and hope some day we will. I think that maybe they just need a little space. I know I have to carry these electrons down this road, but why can’t they move my pole position just a few feet over? Every time I get snapped and even when they have to lay me down for more extensive surgery, every time they pick me up they put me right back where I was. Why mom? I asked my humans and they said something about “bureaucracy and management.” It doesn’t make sense to me at all.

The next time I will ask my human medics if they can give me some of their bright orange clothing to try on. The humans say they are called “safey vests.” Maybe the carriages will see me better. In fact maybe that’s the whole problem. Could it be carriages cant set that well with those itty bitty eyes they have which have access to much lower volumes of electrons than I do?

If not, maybe the guys and I can create some kind of death pole bingo pot based on our pole numbers and take some of the winnings to support the families of older poles who have spouse poles and tad poles.

Give my love to gramma pole, but please don’t tell her about my working conditions. I want her to be proud of me with the work that I do standing tall despite the abuse I’m receiving.

I miss Poland. No one polkas here, and the pole dancing is very different.