This is NOT satire (we wish it were). Please read.

On Sat Jan 27 2018 the owners of all the beach bars on South Friars except Carambola had their leases terminated and were told to evacuate by the end of February.

This is from a 2013 proposal. No way yet to determine if its the same as planned currently. PM says current one will be made public (after the outcry.. why not before!???!).. but does anyone know where it is?

Current beach to be “consumed” by “back of hotel services” and “boutique hotel”.

Sure progress is needed and inevitable. The point is not to freeze us in time and never allow progress, but we need public discussions, debates and inputs on such major changes especially to what is an iconic view of St. Kitts from Timothy Hill and a commonly used beach. 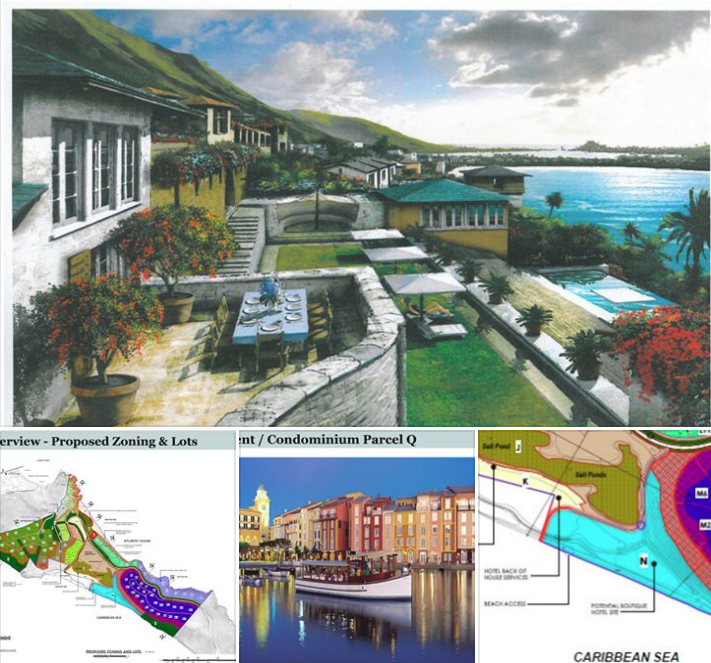 So far all plans are secret although the PM has since the uproar began said they would be made public. Hopefully they will be made available online as well.

Ritz Carlton Maui as presented for example by the Times Caribbean article.
“The Ritz-Carlton, Kapalua resort on Maui has a three-tiered swimming pool that features both family-friendly and adults-only areas.” 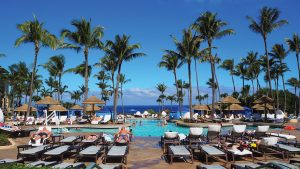 This is freshly breaking news and we have done our best to verify it from multiple sources including the bar owners themsevles. Corrections and/or additional information is welcome.

30 days notice is not much time for any of these bars to even consider relocating properly and some had even paid their rent a year in advance already. It seems that the owner is simply in a hurry to get rid of the bars in a quick effort to meet the demands of a buyer of the land.

In times past this area was restricted from development because of its value as a wetland area for migrating birds, and because of its low lying nature and being in a hurricane zone. At some point it appears that the regulations were changed as they were in other parts of The Federation, making the value of the property sky rocket.

The bars along South Friars (Shipwreck, Godfathers, Olivia’s, Discovery) all lease their land from the owner of the larger property. Normally when a lease is to be terminated the owner gives sufficient notice to allow tenants to deal with the situation, but only 1 month notice has been given. There seems to be no need for such a rush even if the actual eviction cannot be stopped.

Carambola is not affected because they own their parcel of land and do not lease it. Carambola does not seem to be involved in the termination of these bar leases in any fashion.

The brand of the development is Ritz Carlton.

We’ve been told that planning already approved the project in Nov 2017 and that plans are available for public viewing. However a few years ago we dealt with another “secret” development and when we went to planning we had to schedule an appointment to view the plans, were not allowed to carry in any cameras or phones, and were not allowed to take away copies.

Update: Feb 1, 2018 during the Prime Minister’s press conference he said the plans would now be made public, but they are already approved so its still late for any real public input.

Since we started the following things have occurred. This is exactly why we need public discussion and transparency in planning. It is NOT about stopping all development, it IS about making sure everyone is heard and included.

What Can We Do?

Progress is here and it is private property. But we hope that the situation can at least be made “less worse”.

Get the word out! At a minimum we need to have a conversation about this as a society. Will there be any public beaches left in 10 years?

Whether you are for or against or in the middle, please express your opinion. This is what we need – a public discussion!

Contact Tourism. You can use this contact form. But also please call or fax. To call from the US call like any US number just use our North American area code of 869. International charges may apply, but you can make it quick and the cost of the call will be well worth it.

Come drink and eat and support our local beach bars! Also rally with others and plan some (legal) mischief! Please visit and roam among all four bars, they all need our support. Click here for details

This is the part that needs to be part of the discussion. But here are some questions and ideas.

The new Hyatt has done its best to restrict beach access and even the Marriott is closed off from access from the south. How long before the Hyatt or other restrict parking to guests only or charge $20 USD to park? Is it really public beach access if one has to use a boat or walk a great distance to reach the beach? Will there be parking or will we be expected to walk or swim from Frigate Bay?

The Hyatt beach is blocked now and only access is through the lobby. 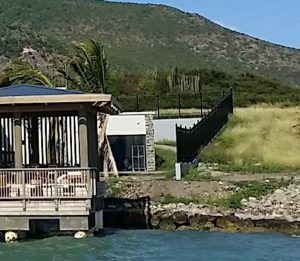 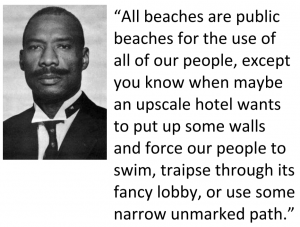 So what is a “public beach” by law? As we understand it in in common law its a bit flexible. St. Kitts & Nevis defined it fairly well and it always includes the “primary sand dune”. Many of the bars are on that…..

Even though SKN defined it, under common law they are free to change it as well. Parliament could meet and define it as minimum 60 feet tomorrow if they wanted – and maybe its time to get something going now to define something better before the development takes over the whole island. A lot easier to do it now rather than later.

And in fact it does say where a change from sand to land cannot be easily determined, then its 20 meters (66 feet) inland from high water mark. The law also restricts buildings with in 50 yards of shore. See legal notes.

Of course we all know how ‘cooperative’ the authorities can be in SKN to accommodate the right people to allow them to ignore the law without any repercussions.

One Month for the Beach Bars?

What is the rush? Why can these bars not be allowed to at least finish out the tourist season which ends in 3 months from now? This would at least give them the bars the off season in which to relocate.

Where can they even go? It seems the only place left may be Conaree Beach.

Even high end tourists want an authentic Caribbean experience. Why can’t such hotels find a way to work with existing beach bars even if they are required to move slightly to make room for more beach use? Do we really need another Salt Plage with EC$20 beers? Do we need to turn our Caribbean experience into a pre-packaged Disney like experience? We are not dissing Disney or Salt Plage. They have their places, but why at the cost of something else?

What about the environmental impact of altering even more wetlands which are rare in the West Indies and which migrating birds rely on as rest stops? Why was this change made? Koi was allowed to fill in a salt pond, why are the plans for Friars so hidden and secretive?

A 2013 study has been found but no one knows if its related in any way to the current development:

The Root of the Problem

St Kitts already has both abandoned and stalled hotel and resort developments. At the core of the problem are:

Most developed countries require one, but not in The Caribbean where cash is king. Developers do not need to guarantee completion and sell property to build and when sales slow down the development goes into stasis such as happened to Embassy Suites, or simply goes dead all together. Koi too has been stalled several times and is now proposed to be less than half the original size, but at least they appear to be able to complete that. In other cases investors have been left without any property and their invested cash was never returned. Angelus was the most famous case of this, but we don’t believe it is the only case.

Developers sell heaven, but sometimes don’t deliver what is promised and in the worst cases, deliver nothing at all. What guarantees do we have that Friars wont turn into an abandoned concrete jungle?

St Kitts already has a shortage of fresh water and an unstable electricity supply and the infrastructure is having trouble keeping up with the current expansions.

Lack of Public Review and Transparency

Developments are pushed through planning without any chance of public review. In nearly every case, by the time the public has a chance to review and comment the projects have already been approved. Reviewing plans is very difficult and no copies are allowed to be taken from the Planning department and no cameras or phones are allowed. Its 2018, why are these plans not online?

Members of the planning board who can make exemptions and changes for specific developments are allowed and often provide big dollar services such as architecture and more for the very same developments they are supposed to be overseeing.