Unity spokesperson of the week John “Big Package” Looburd responded to the latest allegations from ten centimeter man today. Mr Looburd said, “These latest allegations are just more of the same. Its is a good thing for Labour that 10cm man has not figured out yet how hook his Blackberry to Twitter although Twitter could always use more twits.”

“Last week 10cm man alleged that Unity hacked the 2015 election and had help from Russians. First it was alleged that the flight manifests were hacked delaying Labour planes, but of course if this had happened DHS and the FBI would have been involved in a response and there never was even so much as a peep from DHS or the FBI about the US aviation systems being hacked.”

“Now he alleges that Harris had contact with Russians in disguise. It was said that in early 2015 Russia sent an under cover high ranking official to meet with Harris. The Russian official was said to be disguised as a Rasta and even went so far as to offer Harris a Siberian strain of ‘Really Red Haze’.”

“10cm man even went so far as to provide what he declared to be security footage showing the Russian official in disguise.”

RasPutin – The Russian Official in Disguise 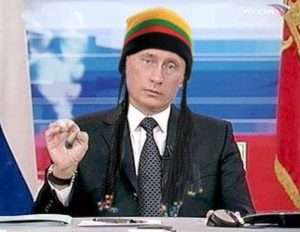