A Canadian tourist while visiting The Federation was suspected of driving under the influence of alcohol and stopped by RSCNPF to undergo a sobriety test. John “Eh” Sosoori of Hamilton Ontario however objected to the merits of the test.

“Sure I had me a beer, but there is no way I was drunk. I’m Canadian, one beer is just an appetizer. Sure I drink but I do not drink and drive.”

“I was driving just past the prison when an officer stopped me and demanded I take a sobriety test. He told me first to touch my nose with each hand which I did. He then asked me to walk a line and pointed me to the road side where PWD has just freshly painted a line. I followed the line perfectly but the officer said I didn’t walk straight.”

“A debate ensued and I told the officer he was as straight as the line he asked me to walk if he felt I was drunk for failing his test. The officer demanded that I must be drunk since the line was freshly painted and must be itself straight.”

“Fortunately for me another car passed which had tint and the officer let me go and climbed back in his vehicle to pursue the potential terrorist.” 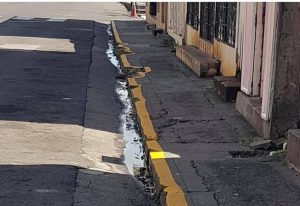