John “Cashia Bush” Smuthson, the now Weed Whacking Manager in Training for PWD announced today that PWD will be changing its name to better reflect its performance.

“Today we decided that PWD was no longer appropriate after our amazing job of creating a trick button in a rock fall area. We though about hooking but buttons to a servo to toss pieces of the museum off for people to dodge, but we were worried that a tourist would not understand our work ethics and get hurt. We know that local residents are accustomed to dodging rocks from trucks, so we know they can dodge falling stones from the museum too since none of them have gotten hurt yet.” 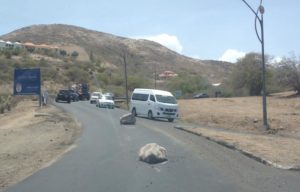 “Why fix something before someone gets hurt or killed? Until that happens, its not a proven danger. Is just speculation by worry warts who come from nanny state countries. Maybe we can hang some helmets on the pole wid de button for people to use.”

“People keep demanding that I do sumting but wha me gonna do? Aye jus a weed whacker. You wan me mow de roof? Cuz dat ain gon happen. Aye fraid heights. Ain nuttin in me contract bout doin dat. Aye get high, but aye no go up high.”

“So from February 1, 2018 we will officially be known as PWTFD – Public WTF Department”