John “The Ark” Woffard, the Acting Moral Spokesperson for Carnival 2017 announced that in response to complaints of residents about lewd behavior during the march that there would be changes for 2018.

“We received many complaints about the amount and level of lewd behavior by many marchers this year. We asked the police about indecent behavior but we were told that nothing could be done because unlike 50 cent no one said a bad word and therefore simulating the act of f*** is not an offense. On the other hand saying the word f*** is a jailable offense. So long as people only show it and don’t describe it, then that is allowed.”

“Many people were concerned about the impact of this on our nations youth who are impressionable. I want everyone to know that we are taking steps to prevent our children from being corrupted. For 2018 we will ensure that no marchers are under 18. This will protect our children. Any person under 18 next year will be told to march in the Childrens Parade.”

“As culture evolves, so must Carnival. We cannot stay behind the times like some backwater. So for 2018 we will evolve and instead of Jouvert, we will call it Orgía Pública. In the continued interest of protecting our youth, the Childrens Carnival however shall remain unchanged.” 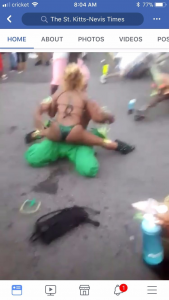